I woke up early morning because there’s a shooting for TRAXXfm. I was very excited of course, but at the same time tired because I had a drink the night before @ Brussels with a group of lovelies (in celebration of Mary’s birthday ♥). In fact, it’s the first time hanging out there & I found out that every Wednesdays, half pint of Hoegaarden Rosée costs only RM10! This is me before makeup… see, my eyes are so tired!! 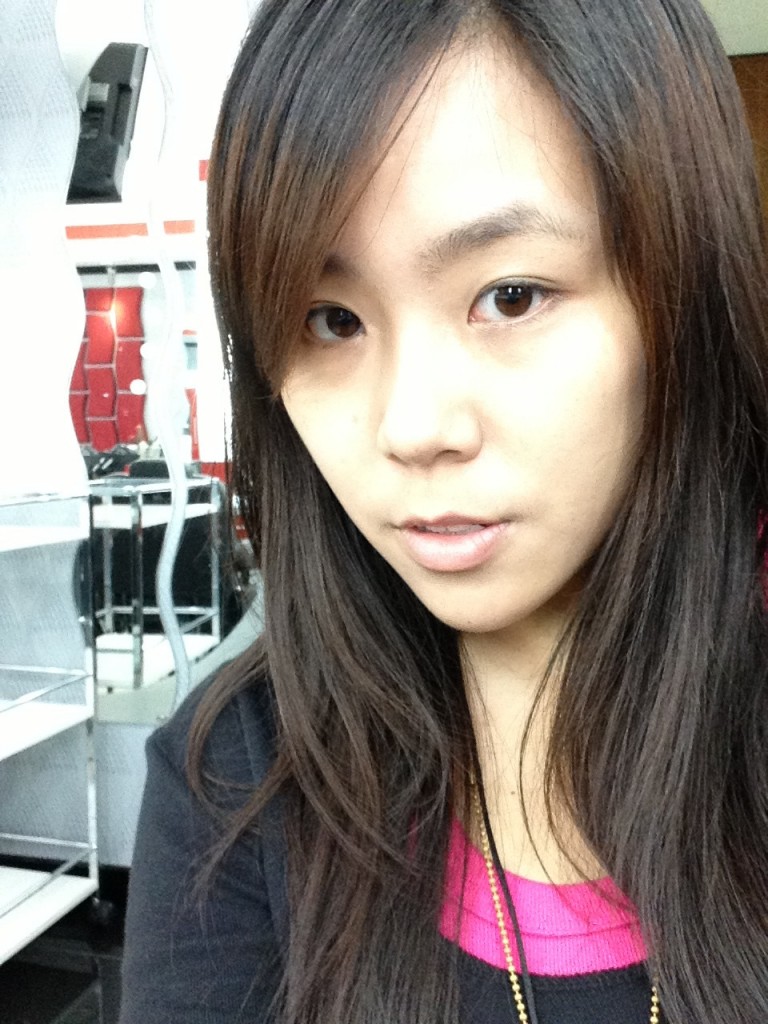 The makeup took ages! And honestly… I think my makeup was over the top! The makeup artist actually put FOUR layers of foundation & concealer on my face. When I smile, I can literally see the cracks of the foundation on my face *ehmargerrrd* And she even tried to CURL my bangs, I think she wants me to look like Betty Boop! I said, “HOW ABOUT NOOOOO!”

After the makeup, I quickly rub off the makeup from my face. I gotta use lotsa tissues to do that!
Finally, I look more natural… While waiting for the camera set-up… Meet the Radio announcers of TRAXXfm *sadly not all is in the picca though*
Gentleman left to Right: Nicky, Greenman, Kong Eu, Par, Lisham (in the center), Kevin
Ladies left to right: Rina (Morning Zoo producer), Linda (my producer ♥), Mary, Dianababe (myself), Isabelle Finally, we are all ready to strut ourselves for the shooting scenes…
all chit chattering while waiting for the camera (>‿◠)✌ 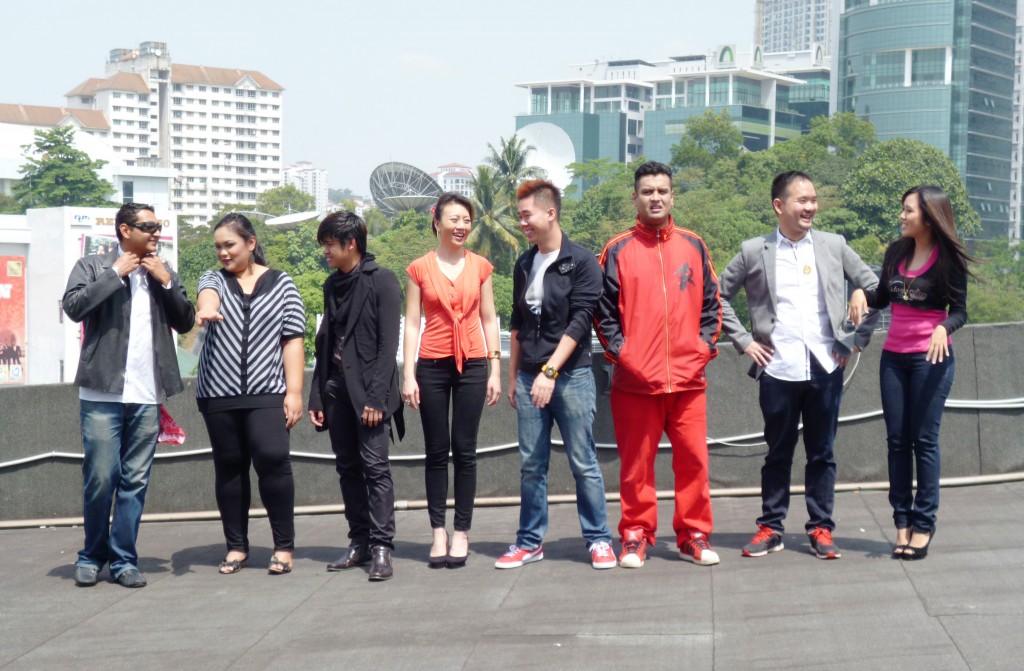 Getting ready… *camera rolling*
Standing under the hot sun… we did numerous NG (retakes)! Although the scene consists of us walking towards the camera (like the CSI scene) but it took quite some retakes for us to do it perfectly in sync! 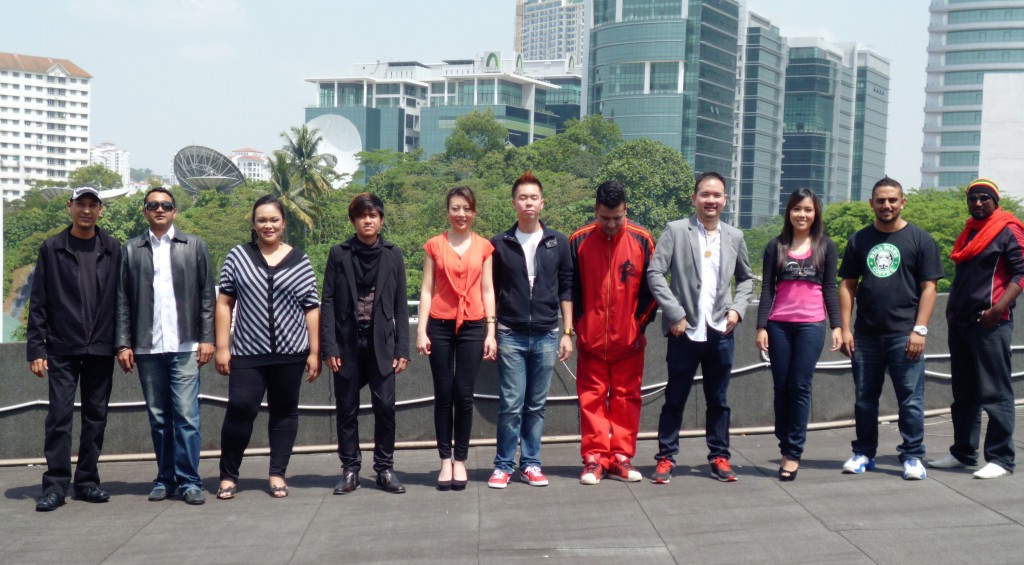 Finally when the scene was done… I went to grab lunch! Chicken rice buffet was served *nom nom*
I know I should not eat carbs when I’m on diet, but I’m too hungry & the rice was damn good! 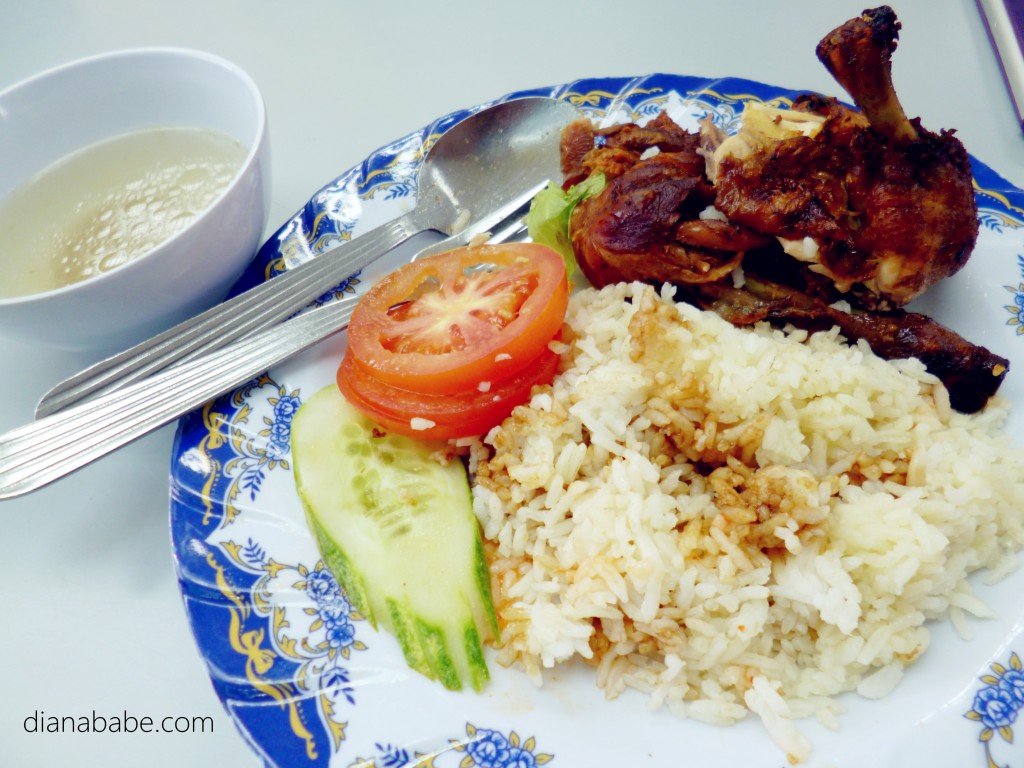 However, half way enjoying the rice… I was called for another shot before I finish my lunch 🙁Here comes the green screen… Waiting for the director (Shah) to tell me what to do *winks*
PS: Omg, need to workout to lose my ass & thighs *diet diet* 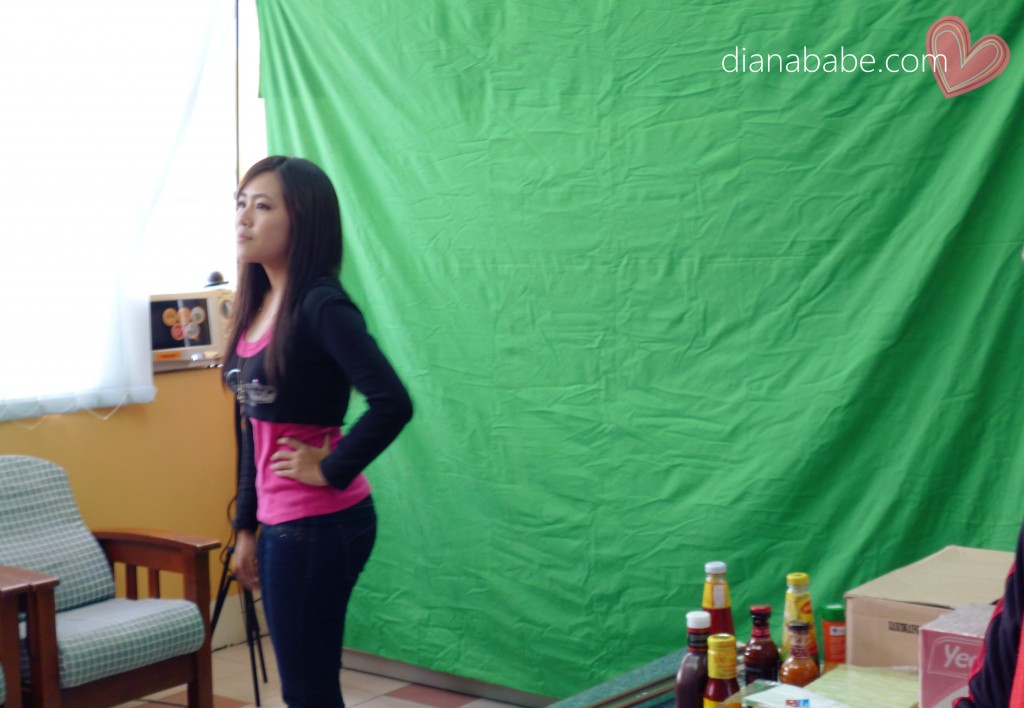 Afterwards, we had to get down to the studio & continue with the shots.
In between shots, the call time was so long! Waited long time before it’s my turn, because each DJs had to be individually shot in the video *faints* While waiting… time for SELCA fun! It’s the fastest way to past time anyways 😛 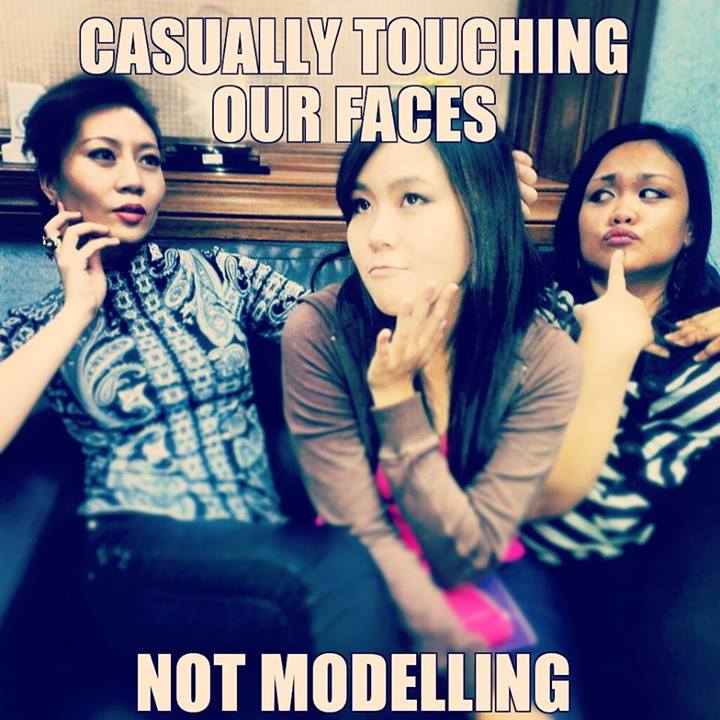 Finally after all the fun (and wait)… Here’s my shots! 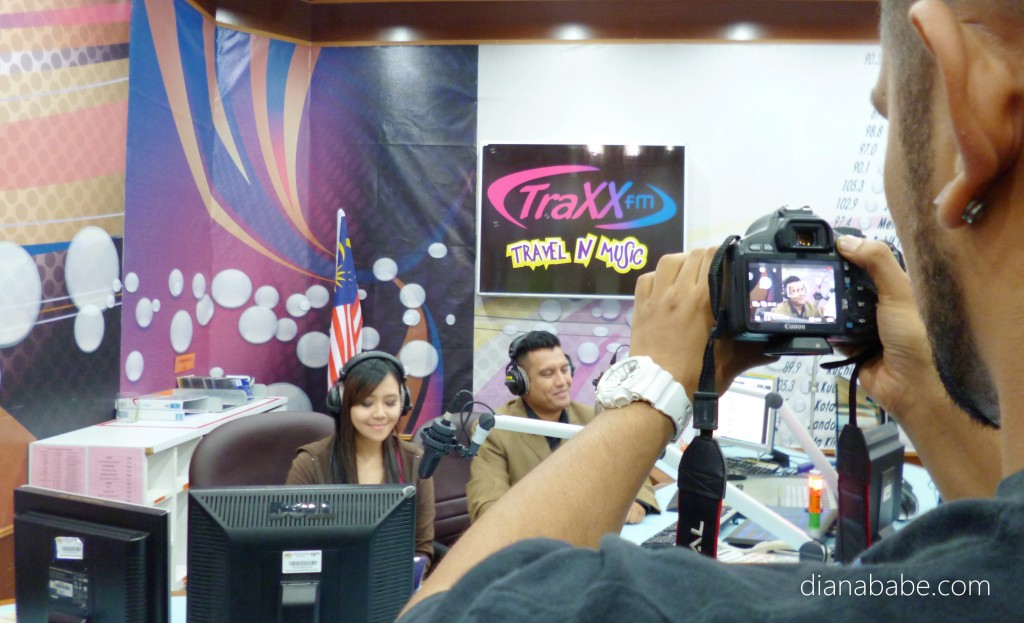 #Looks like Shah & me were competing in a stare down! Haha# 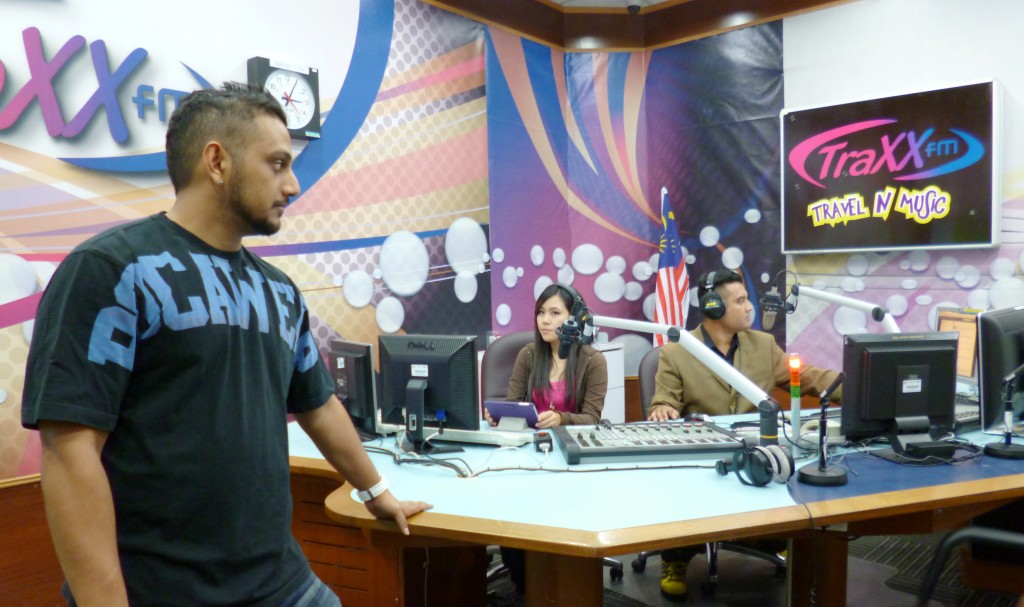 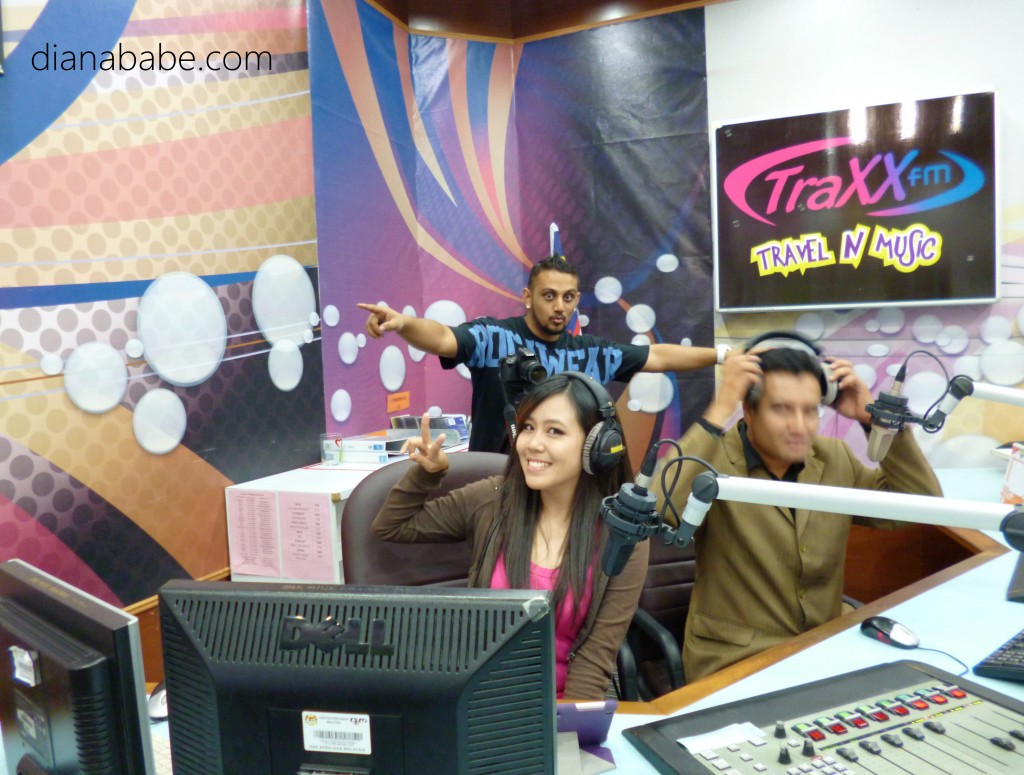 Finally, when the shooting was all done it’s already 4pm & time for my working slot. Had to work until 8pm! Another tired long day, but it was fulfilling.
Believe it or not… It feels more fun when I’m busy (rather than rotting too freely without purpose in life). Anyways, it’s already 1:20am now! I must sleep, as I have another shooting tomorrow (for World Vision 30hours famine promo purposes). Gotta get my beauty sleep!
Thanks for reading, and have a lovely night *KISSES*

PS: I SHALL SHARE THE VIDEO WHEN IT’S PUBLISHED. Hopefully it will be on TV1 and TV2 *hip hip hurray*

First selfie of 2021! This year I have NO resoluti

This is why u can't bring me places.🤡 @zenm4ste

Because cigars don't light by themselves. Btw, i

I need a bigger 'straw'. Swipe left for a better v